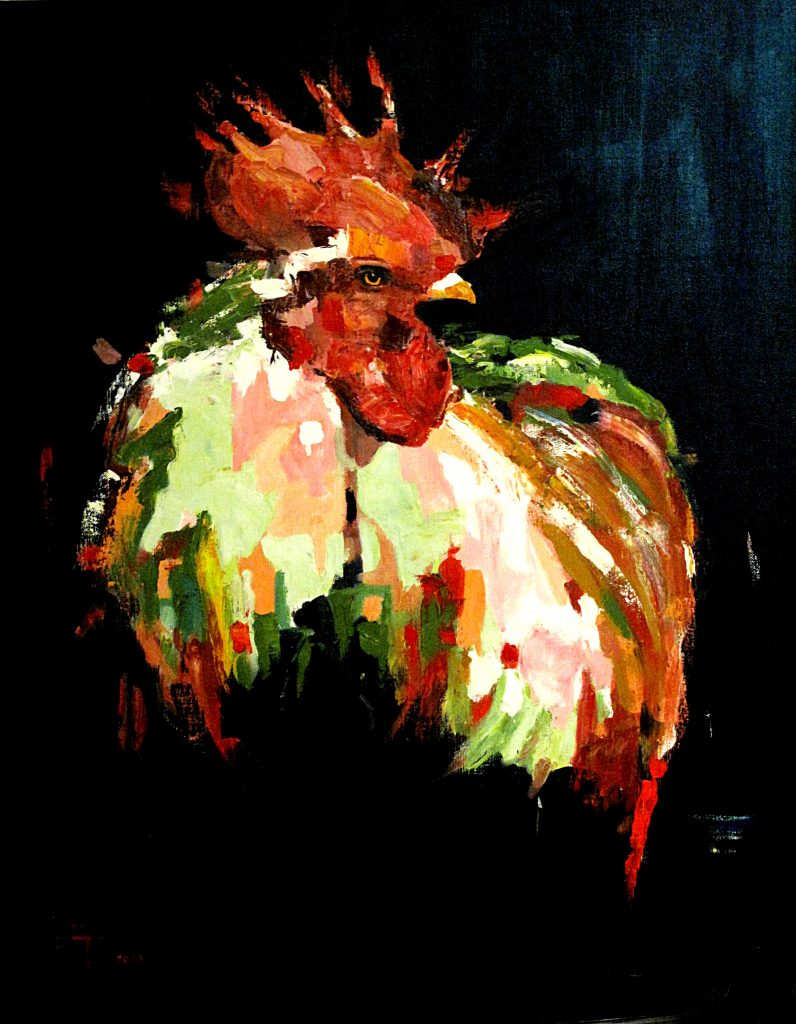 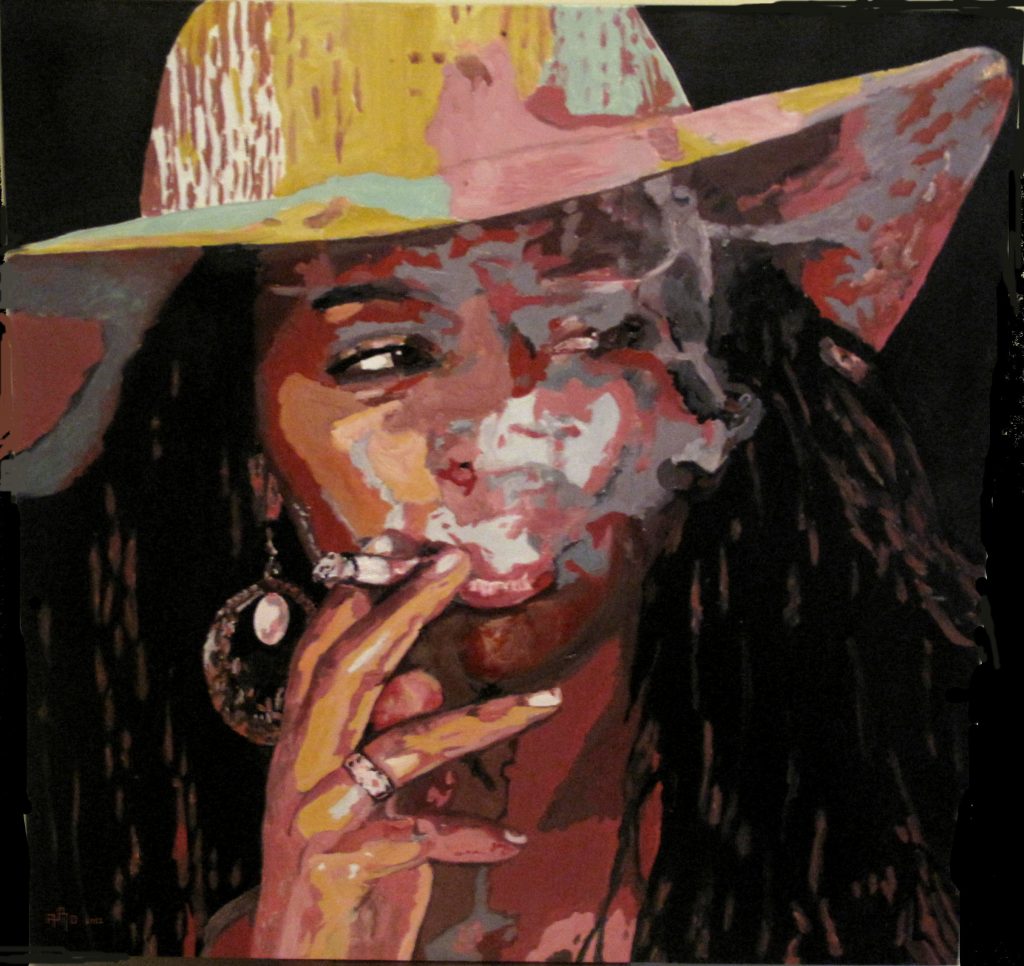 Since Aesop and before, literature is full of references to animal characteristics and how they apply to humans. So it’s not surprising that our personalities share qualities with particular as personification, is a well established literary device from ancient times. It extends back to before Aesop’s Fables in 6th century BCE Greece which employ anthropomorphized animals to illustrate principles of life. Many of the stereotypes of animals that are recognized today, such as the wiley fox and the proud lion, can be found in these collections. Aesop’s anthropomorphisms were so familiar by the first century CE that they coloured the thinking of at least the philosophers.

The French Alain Rousseau is an contemporary artist who is not only familiar with the psychology of but also involved in this theme, creating series of paintings in oil on canvas. Currently living and working in China, Rousseau is essentially painting living beings which are morphopsychological studies to feel impressions and share emotions with the subject. These subjects painted in an expressive style are inviting us to enter into dialogue with the characters.

It is not unimportant, that before Alain Rousseau started his artistic career, he had to observe and dissect the records of many candidates for recruitment and call morphopsychology and physiognomony. As Director of Human Resources in major international companies he took on responsibility for many members. Therefore the face is for him a great sense vector
providing access to an approach of the personality.

In reviewing his artistic concepts, Alain Rousseau explains the meaning behind his series: “There are similarities in the way we look of a rooster or a horse that may have imperial eyes, a domineering or benevolently posture. During the process of painting, it happens that I think of a person but paint a rooster, because they are similar in the profile. Regarding smoking people, I observe their attitudes, studying their codes on how to hold a cigarette in the hand or mouth, using the symbolism of these attitudes for my compositions.”

Alain Rousseau is a French artist, graduated at Belgium Saint-Luc with Bachelor of Arts in Architecture, Drawing and Painting. At Belgium Higher Institute of Media and Public Relations he obtains a Master Degree in Communications. Alain Rousseau holds a Master Degree in Economics and Enterprise Management at the prestigious Paris-Dauphine University. At the Art School in Strasbourg he attended the class of the French painter Pascal Antony, former student of Paolo Conti, famous Italian painter of Academia di Bella Arti of Florence.

Since more than seven years Alain Rousseau is living in China, where he is teaching at Sichuan University. Engaged in the arts and culture in France and China, he is a member of Artist’s Association of Chengdu and Academy of Oil Painting of Chengdu. Amongst his countless art exhibitions it should mentioned, that his artworks were exhibited at Bastille Paris (France), Art Market Strasbourg (France), XLY MOMA Museum Chengdu (China), Museum of Taiyuan Shanxi (China), Meishuguan Museum Chengdu, Chengdu Provincial Museum (China).

Regarding his technique it strikes, that his portraits are focused on the psychology of the  character   in   bright   colors,   but   the   background   is   painted   monochrome   black.   The   artist ames his style “chromobscur”, based on two main elements: first the background, inspired  by the Flemish and Spanish painters of the 16th century, including the Chiaroscuro that is dark and not figurative. In the second step Alain Rousseau is using violent colors suggesting  Impressionism and Cubism attitudes to overcome the conventions. In his studies he has been influenced by history of art, architecture, cult movies and their dramaturgy, among them  “Stagecoach”  by John Ford, “Armoured Cruiser Potemkin” by Sergei Eisenstein or “Seven Samurai” by Akira Kurosawa. Another influence is caused by his working experience at  television studios, sets and photo shootings, close to multi media, journalism, photography and advertising.

Alain Rousseau currently painted a series of roosters titled “Crête impériale”, “C’est l’heure”  et “L’ empereur”. The “L’empereur” rooster is one of the talented, creative, but somewhat eccentric person who makes life interesting for the rest of us. The bird-like mind is always on  the   lookout   for   stimulation   and   displays   the   characteristically   high-energy   behavior.

Rousseau’s roosters exhibit a decided theatrical streak as they strut their stuff in the latest  fashions. Craving attention, their show-off attitude sometimes generates criticism from those close to them, and the need to be the center of attention permeates every aspect of their  busy life. The rooster’s active mind is always working on a way to create more drama in its life.

The “Crête impériale” seems to be a salesperson. This rooster is able to sell anything from  real estate to used cars. A hard worker with a keen eye for detail, its creativity and dedication  make it a wonderful employee. As a manager   or business owner, however, a rooster is finicky and picky and tends to alienate subordinates with unrelenting enthusiasm. The rooster  is not a particularly strong team player, and the perceived self-absorbed and sanctimonious attitude breeds resentment. In the painting “Cest l’heure” Alain Rousseau is subscribing to  the early bird maxim. Roosters rise a little earlier than their competition and could even be accused of having their fingers in too many pies. The world is so fascinating to the rooster  that settling down into any one career would be impossibly constricting. But this rooster may succeed when to choose a career that presents a variety of challenges, such as publishing,  journalism or acting. 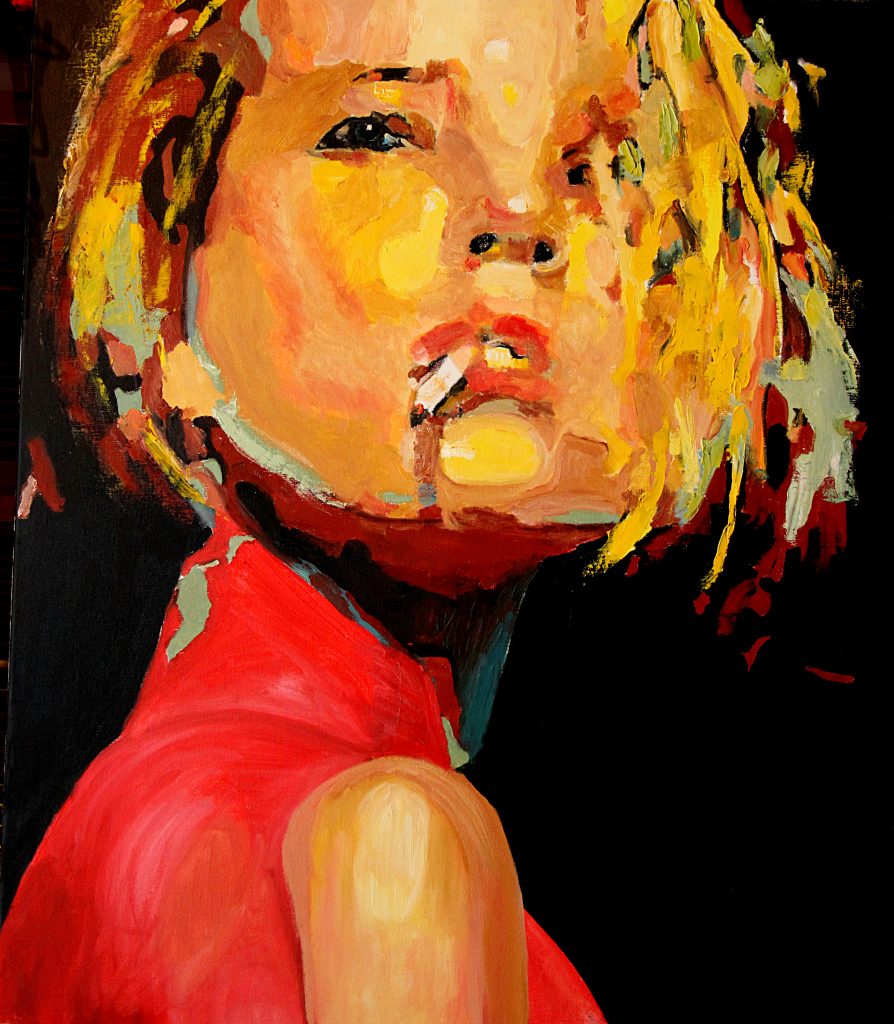 Regarding the smoking women, Alain Rousseau fixes her eyes in a melancholic stare in  “Noire Attitude”. But the artist also renders the woman as masculine in “La dominatrice”. He  achieves this by painting her with an excessive amount of hair in her face. Alain Rousseau also uses a similar color and brushstroke when giving her the appearance of having facial  hair. Her masculinity is further emphasized by the pose of the cigarette she holds in her mouth, as a symbol of power and independence. In “La dominatrice” the cigarette seems  to  be a fitting symbol for appropriation by an emergent type of woman, who battled to gain political and economic liberty. Both portraits are representing educated middle class women  who asserted their right to do just what pleasured whether or not it was deemed appropriate for their gender.

The main colors of the paintings are imperial purple on black background, added with an  alternating   imperial   purple   and   gold   Byzantine   elements,   like mosaics in   the   roosters gorgeous feathers. These colors are typically associated with royal power in Byzantium. The  subjects are placed in the center which visually enlarge them. The use of oil on large canvases is deliberate for another reason. Because of their size, the portraits work on a  representational level. On closer inspection, the image echoes the qualities possessed by the eye and the camera for zooming on the subject. It concerns with the relationship between  the flesh and the self and continues to be a significant factor in the development of painting portraits. In addition, employing a black, neutral ground, the work attempts to get to grips with  the respective qualities of the photo snap shot, both universally familiar but defying any specific interpretation. In this rejection of the   use of visual props and the accompanying  symbolism,  the artist forces the audience into a position of responsibility and accountability with regard to the old favourite, no man is an island.

Alain Rousseau’s paintings are characterized by sympathy and irony but not overarching  sentiment. The raw authenticity of portraits dominates in his oeuvre. The paintings burst with tiny expressionistic specs and dashes of oil on canvas that build to gloriously portraits in all  their splendor. It   is obviously this   unflinching documentation of truth that defines Alain Rousseau’s visual work.

In 2002 she earned her PhD from University of Kiel with a Dissertation on Modern Sculpture:  “Sources of Inspiration.The Meaning of Nature in Henry Moore´s Late Work.” Barbara is an art historian and art critic who has written widely on modern and contemporary art.     Her  essays have been featured in          monographs,    exhibition     catalogues,      e-zines, journals   and  Goethe Institute Inc.